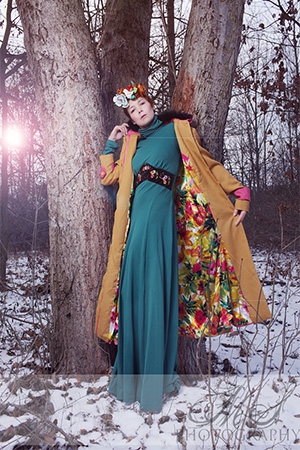 Colombian born Spanish designer Ricardo Ramos has been doing fashion since his childhood, most of his work is inspired in the identity signs and cultural heritage related to costumes and textiles from different countries all over the world, with special attention to the folk, tribal and indigenous traditions, executed after extensive traveling and deep cultural immersions. Ramos is also concerned about working from a sustainable and ethic perspective believing in recycling as a relevant way to do contemporary fashion since the very start of his career. Globetrottering in more than 45 countries and international studies in Paris/France (Paris American Academy/Fashion), Barcelona/Spain (Barcelona's College of Antique Dealers/Antiquarian in Western Decorative Arts) and Mumbai/India (Lemark Institute/Traditional Indian Textile Design) also workshops in London/UK (Central Saint Martin's/Experimental Fashion Illustration, Westminster/Tailoring Dior &Chanel) gave to Ricardo Ramos his flare to understand fashion from an ethnographic consciousness and a sociological reality instead of the aspirational perspective very common and generalized in the fashion industry.

From mosaic bags to shoes, Cassandra Amoré is a force to be reckoned with in the fashion industry.
Published in News
Tagged under
Read more...
Monday, 19 August 2013 22:03

“Fashion needs to prove to men that it’s not scary”

Founded in 2010, by Amanda Rabor, Isossy Children is a celebration of colour, vivacity, global influences and fashion.
Published in Fashion
Tagged under
Read more...
Thursday, 25 July 2013 13:31

Design a playsuit for Jessie J

Published in News
Tagged under
Read more...
Page 1 of 35