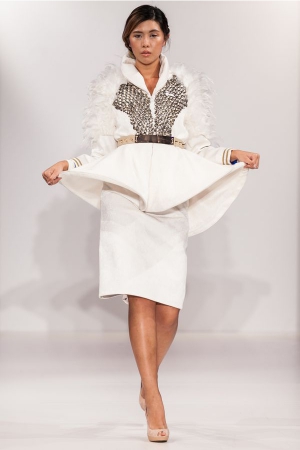 Vinnette Grant is a ground-breaking, innovative and award-winning designer.

London Designer, Vinnette Grant is renowned for creating the impressive 20ft bridal skirt that was sensationally showcased in the 2011 iconic Oxford Street Christmas window display at Selfridges who’s window displays are recognised as some of the most extraordinary in the world.

This has gone on to be featured in a video Creating a White Christmas at Selfridges and is also featured in an article on site; Fashion Foie Gras.

Vinnette’s work has been sold in Harvey Nichols amongst other Knightsbridge and Kensington boutiques. Following a family and career break, which included working as cabin crew for British airways, Vinnette has re branded as Vinnette Grant Unbridaled Couture and is ready to take on the World.