The Rise of Cottagecore And Its Connection With Escapism

When your only association with secluded pastoral life is mud and dust then think again, this aesthetic has  been stylised to such popularity that youngsters want to ditch the city life altogether!

Comparable to Romanticism in the late 18th century, something new but on a closer look quite alike has been proliferating throughout 2020 and 2021, the British Cottagecore aesthetic. 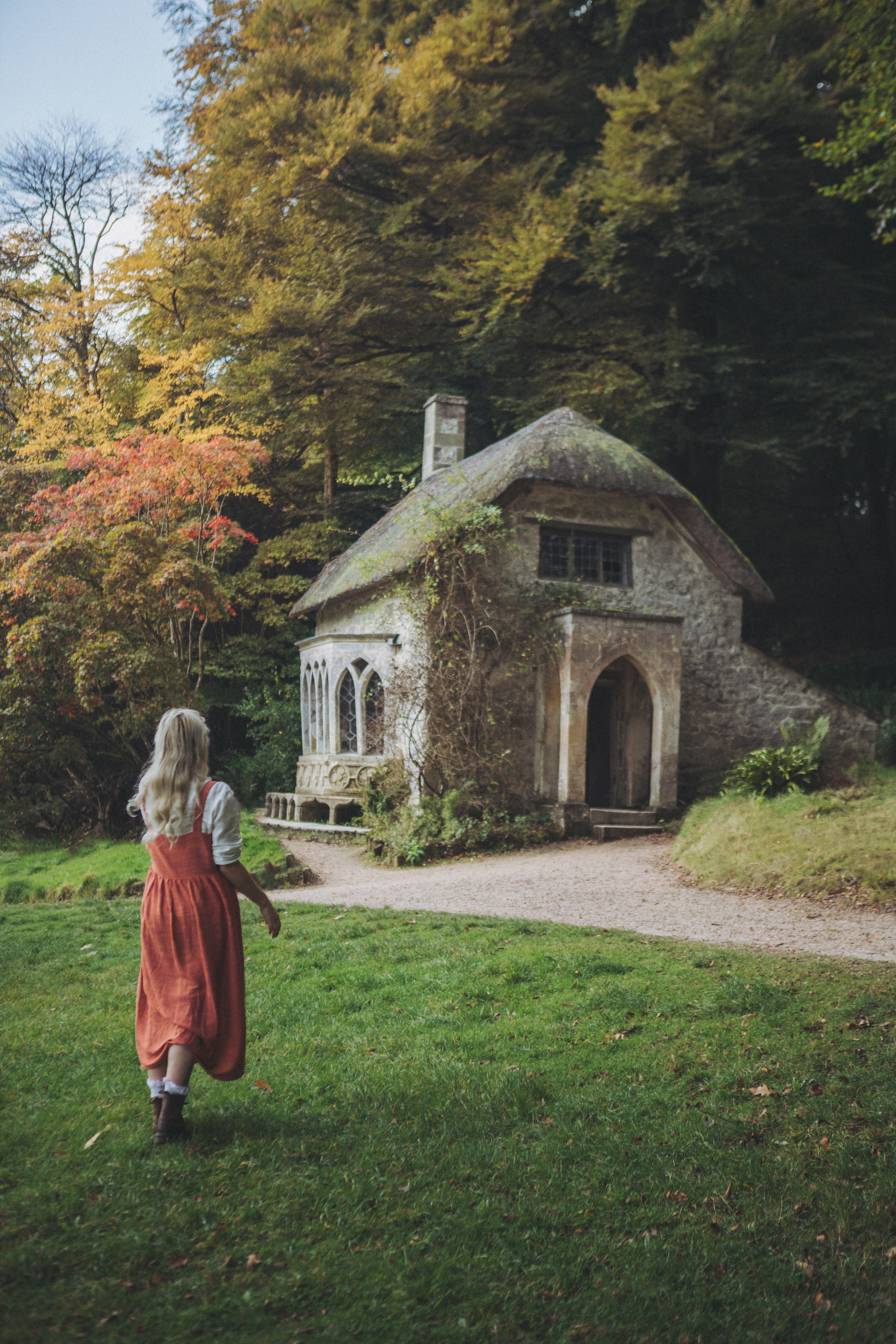 Ramona Jones aka @monalogue pictured in front of a cosy thatched roofed cottage. She and her husband @aaron.etc give their loyal followers breathtakingly beautiful glimpes into life from their holistic English countryside cottage.

A Brief Look Into The Past

Let us take a short historical recap and look back to its probable predecessor to grasp this trend’s roots and overlapping aspects. Romanticism was a reaction against the preceding Neoclassicism, as well as the emerging Enlightenment and Rationalism movement brought about by the French Revolution’s key concepts and later inspired nationalist movements throughout Europe. Romanticism encompassed a strong rejection of the view that reasoning itself is a source of knowledge or proof, further scientific progress, urbanisation, the Industrial Revolution, and its growing focus on materialism at that time. Huge factories did not only destroy major parts of natural landscape, but unimaginably long hours of monotonous toil quickly unveiled various negative consequences on society and people’s psyche. Urbanization eventually forced them to flood the cities for employment. Romantics contrasted these watershed events by shifting their focus back to the individual, harmony, the emotional, the transcendental, and a renewed interest for retreat into nature. In short, it culminated in a profound shift in sensibility (Austen’s romance novel ‘Sense and Sensibility’ perfectly encapsulates the movement’s key agenda in its title). Hence, extreme assertion of the self, alongside a heightened value of the individual experience dominated their works.

Similar characteristics can now, over 200 years later be seen in the Cottagecore aesthetic, which is currently filling our Instagram, Pinterest, and Tic Toc feeds like nothing else.

So, how can it be that similar aspects apply to this youth lead aesthetic despite evolving under completely different circumstances? We will dive into that question later on!

What The Hell Is Cottagecore Even About? 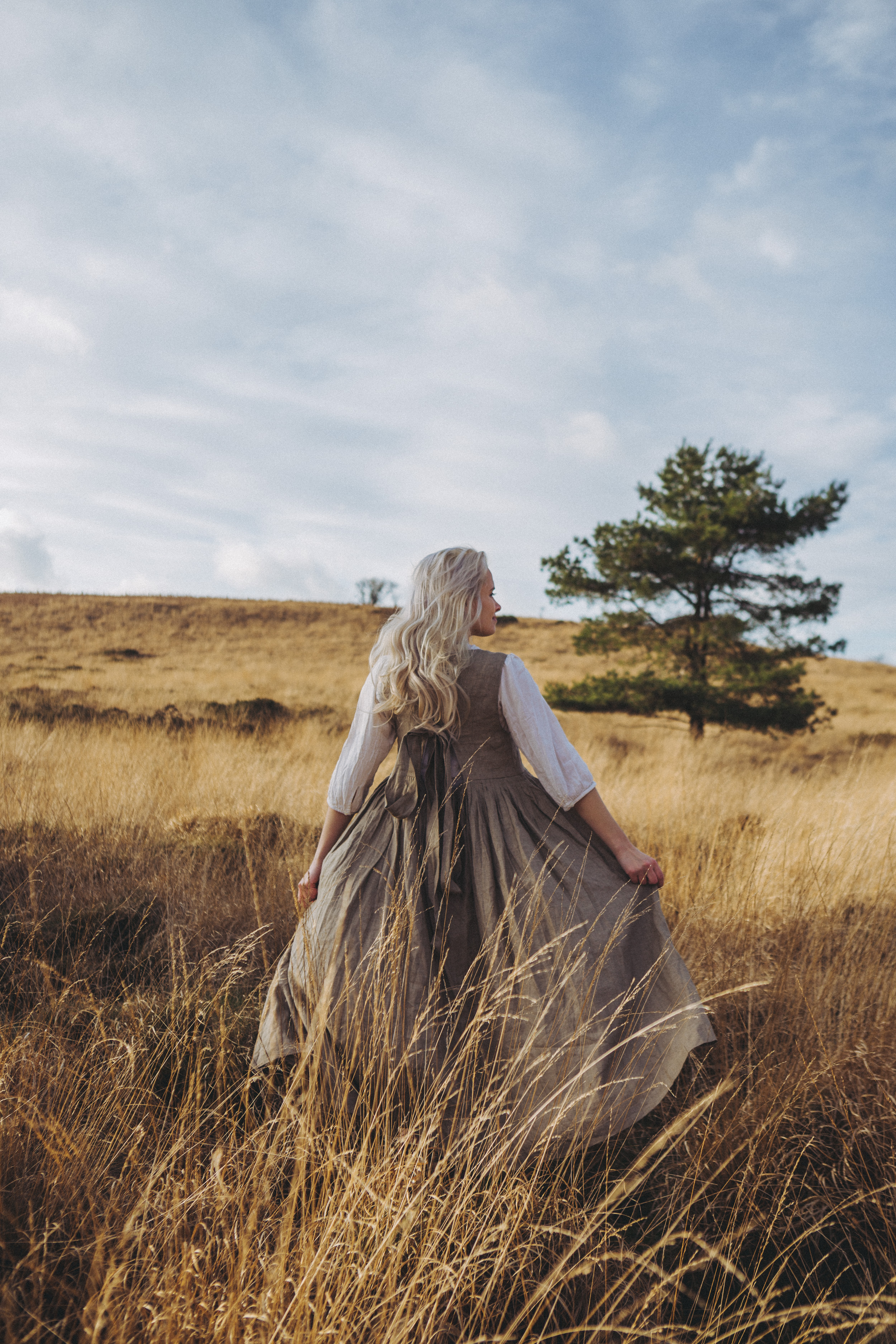 Ramona buys lots of her gorgeous, floaty vintage dresses pre loved in alignment with her sustainability values. The couple frequently shares their travel adventures across the UK, alongside mindful baking receipts, photography, personal thoughts, and lifestyle. All those gorgeous historical buildings, natural landscape, and retro fashion content will inspire you to head out and discover its beauty firsthand.

First things first, what exactly is the Cottagecore aesthetic?

In a nutshell Cottagecore celebrates a highly idealised rural life and nostalgia for the countryside, emphasising overall simplicity and reclusive activities like gardening, baking, sewing, reading poetry, painting etc. Already present on Tumblr in the 2010s (the blueprint for so many trends at the moment) it underwent a huge resurgence most prominently due to the rapid growth in popularity of social media platform Tic Toc, later tripling down to the likes of Instagram and Pinterest. This in itself can be traced back to teenagers and young adults all around the world being stuck at home, facing lock down after lock down, and as the saying goes “boredom sparks creativity “. However, there is also a much deeper psychological reason for this. The pandemic promptly took away our fast-paced life routines forcing us into a collective isolation. We have all had to adopt to a slower pace of life after all. Cottagecore indeed champions exactly this notion of solitary retreat and approaching things with an eased and calm mindset. A return to simpler times if you want so, living in appreciation and harmony with nature, basically an archetypical antithesis to modern hectic and technology-based life. 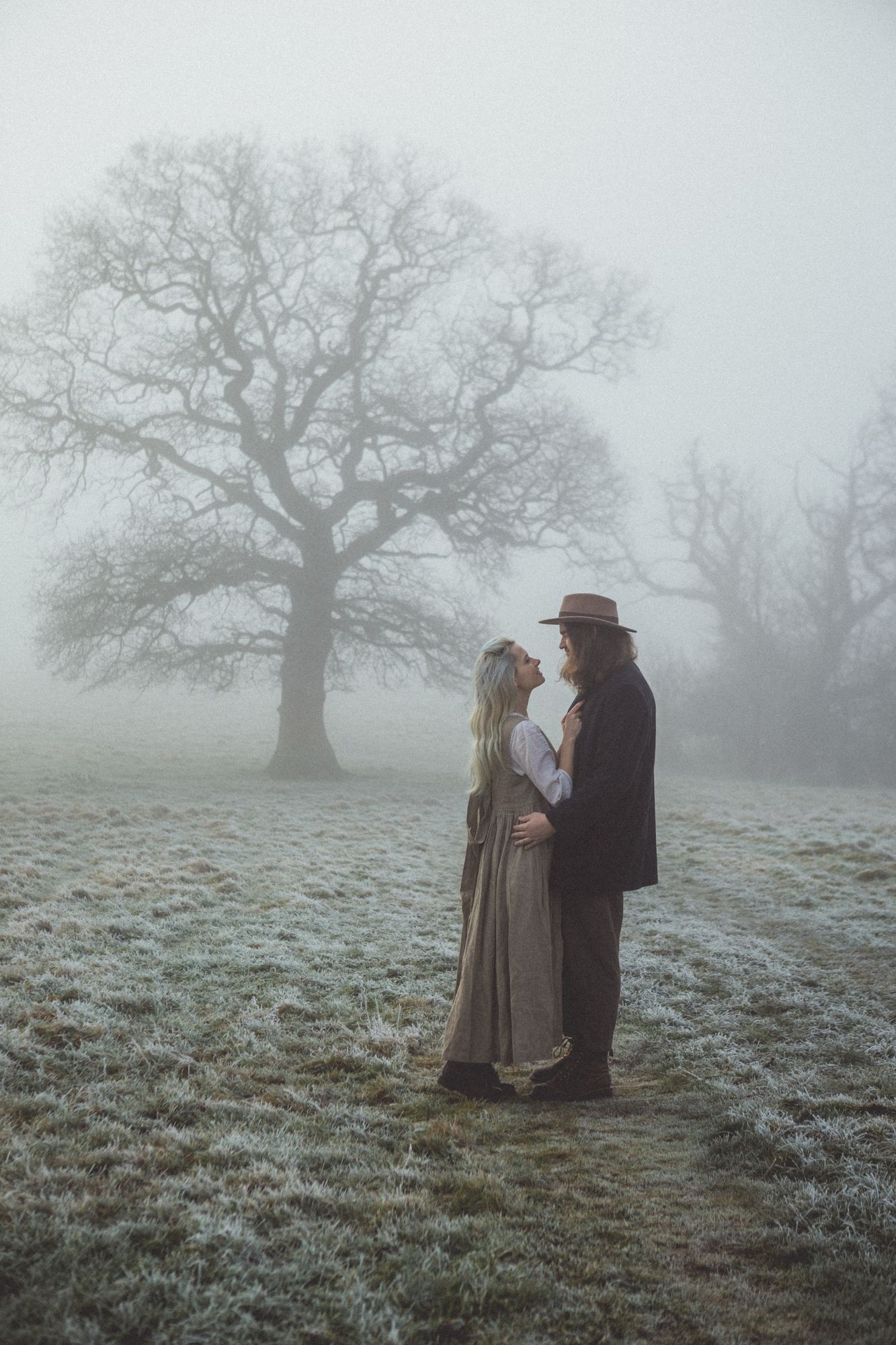 Ramona (@monalogue) and Aaron (aaron.etc) midst a sublime foggy scenery. The two are part of the community's ogs, creating a genuine and authentic insight into the beauty mother nature has to offer.

We all remember when taking a walk outside literally became the highlight of a day, right? That is precisely when we learned to appreciate the little things. Aesthetic trends are usually a result of cultural events happening around us and therefore can be traced back to impactful historical events, be they stretched out over a longer time period or a single event. With Cottagecore quarantine suddenly became romantic, even fun, instead of tremendously terrifying and the epitome of uncertainty and loss of control.

Naturally this also transcends into architecture, home interior, music (Taylor Swifts indie rock album Folklore is praised as the ultimate Cottagecore record) and above all fashion. Think wide flowy white and crème toned dresses, peasant style blouses, billowing skirts, and of course the infamous prairie dress with all its ruffle hems, statement collars, frills, and puff sleeves, preferably paired with minimalist make up (yes, I am referring to the renowned no make-up make-up look) and either long open, -or braided hair. Straw hats are a must, for all those picknicks in the sun, so are rich retro embroidery, floral prints, solid earthy colour schemes and lots of knitwear pieces, ideally handcrafted. 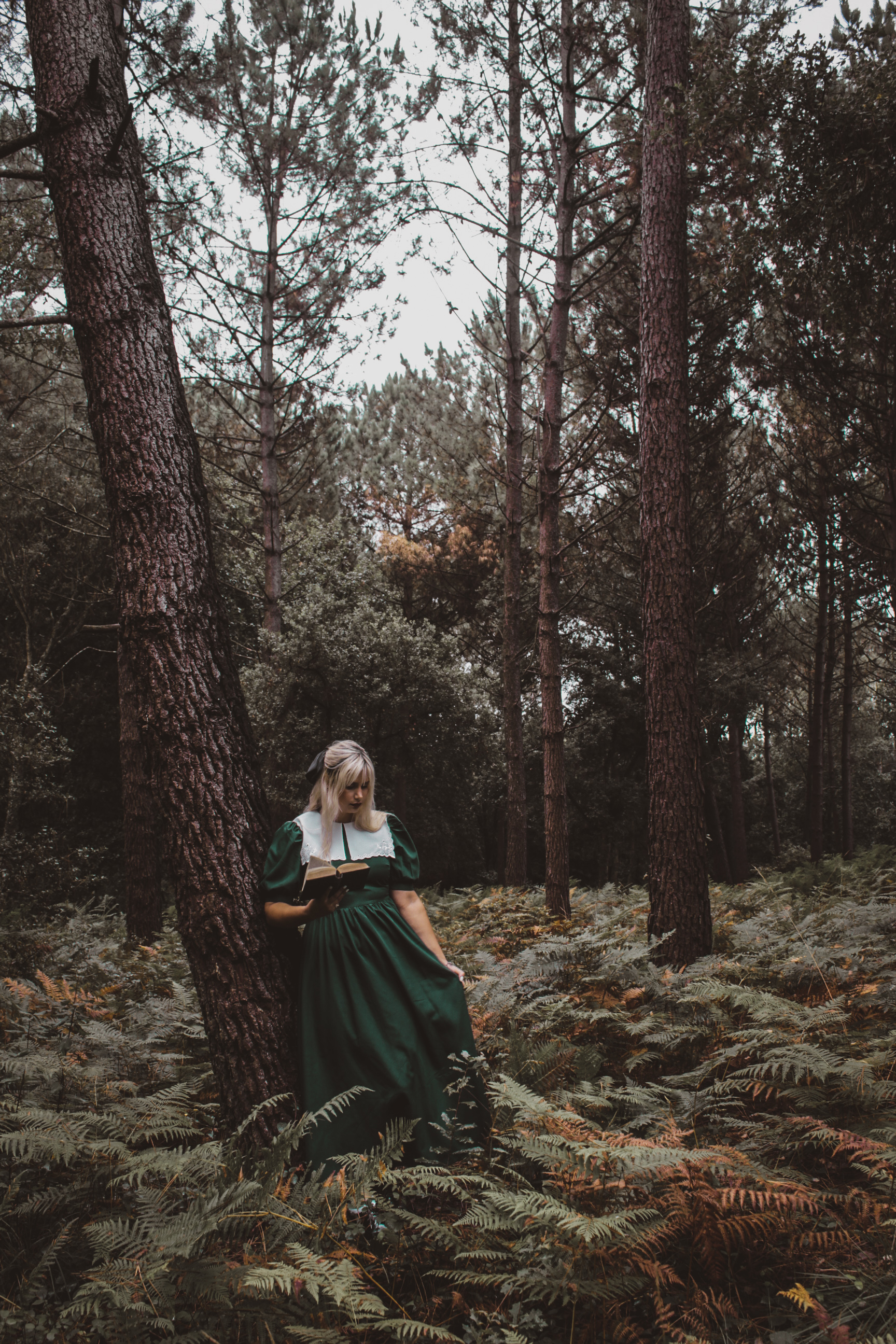 As the style is very much linked to- as well as rooted in by gone eras you can dress the part by thrifting clothes and buying 2nd hand, resisting the temptation to buy fast fashion knock offs which merely imitate the real deal. If going down this road, the aesthetic is actually quite accessible when it comes to fashion at least. Other aesthetics like the hype beast, where a vast amount of designer pieces is a strict prerequisite to partake, are financially more high maintenance in comparison. 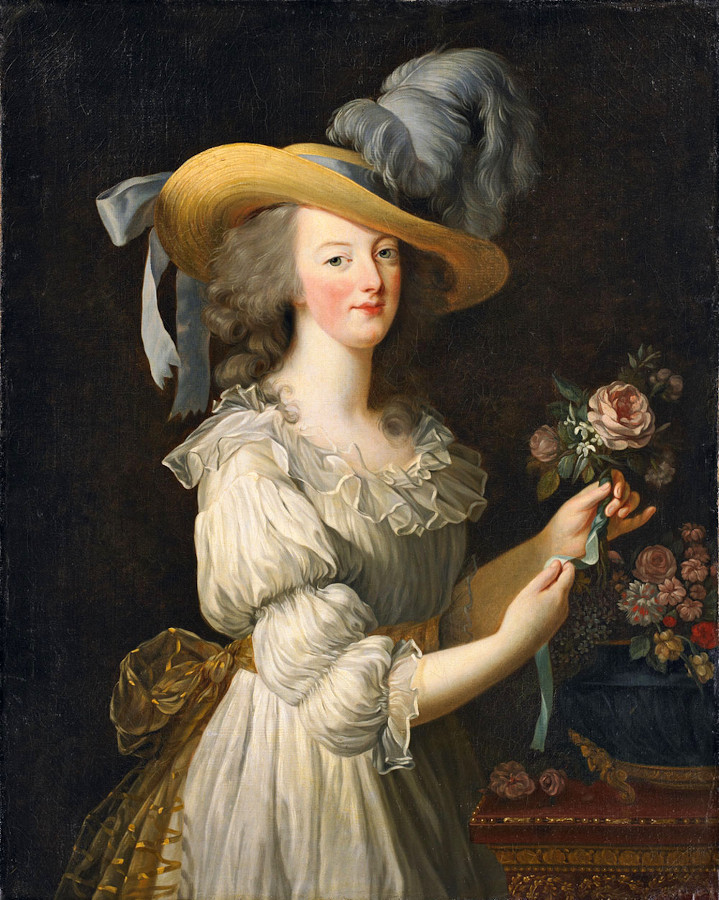 The infamous 1783 portrait by Elisabeth Louise Vigée Le Brun shows Marie Antoinette in a Chemise dress. This painting was removed from the Salon shortly after its publication and due to its bad reception was promptly replaced by a new one, featuring the same position, but a different, more "appropiate" dress.

Romanticising pastoral life and all that is associated with it to unreal heights has been a trend several times throughout past decades, this is definitely not the first time and will not be the last either. Marie Antoinette, histories ultimate fashion icon was gifted the Petit Trianon close to the main palace of Versailles by king Louis XVI as a private get away from the gossiping and strictly protocoled court. Her robe of choice, or more the dress code she likewise imposed upon visitors there closely resembled a chemise, the simple undergarment dress which build the base for the various layers women wore at the time, merely preceeded by stays and a petticoat. Hence, wearing it on the outside was an extremely radical and unconventional thing to do. When Élisabeth Louise Vigée Le Brun published a commissioned painting of her wearing this attire paired merely with a wide-brimmed straw hat and no jewelry at all, public outcry was unavoidable. It was a national scandal, causing immense damaged to an already unpopular monarchy. People thought her immodest (basically wearing what was underwear for all to see since the portrait was exhibited at an openly accessible salon) and not dressing in accordance with her rank and status, whilst condemning her for lavishness if she did otherwise. Aristocrats deducted the queen wearing such an inexpensive textile as cotton emblematic of a breakdown of barriers between the classes which they were obviously more than keen on upholding for their own benefits. It was made of several layers of very fine cotton muslin, with cotton also being the material used for underwear this specific choice of textile further showcased the informality of the dress in its context. Additionally, it was an imported fabric, making it very expensive, leading to accusations of Marie being responsible for ruining the French silk industry, as what she wore naturally became the height of fashion for everyone else. Keeping something spot clean white was also substantially laborious and time consuming, accordingly reflecting the privileged status of the wearer. Lastly, the aspect of class transgression must have been deeply offensive. What we see is a queen’s idea of what a peasant or shepherdess might dress like, quite patronizing for those who didn’t play dress up but had to work for livestock and survival. 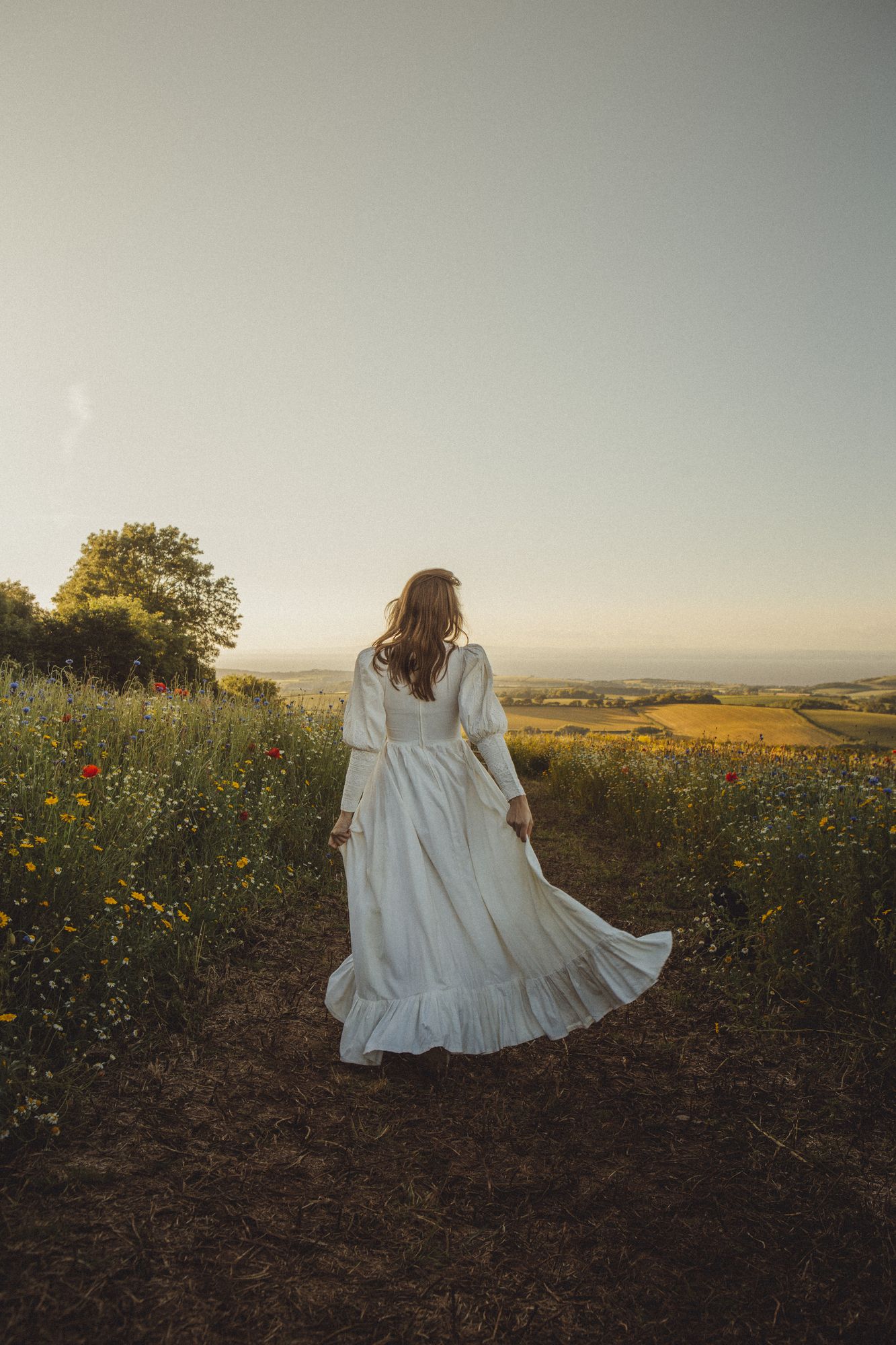 This fairy esque, etheral white dress could very much be interpreted as a modern day take on the Chemise. The lightweigth feel transmitted by this breathtaking shot is probably what Marie Antoinette must have felt like at the Petit Trianon in a style of dress giving her the symbolical freedom she gernerally urged for in her life.

A dive into fashion history nevertheless discloses that she was simply ahead of her time as the chemise became a popular garment shortly after with many aristocratic, even prominent women within France as well as abroad like Georgina, Duchess of Devonshire having their portrait taken in embellished versions.

Thereafter this type of garment became known as “chemise à la reine”. It consisted of thin white, airy, and loose fabric, usually cinched at the waist with a sheer sash to create some form, (a radical departure and complete contrast to the stiff, sumptuous and extravagant French court gowns the queen would wear to all other occasions, which artificially extenuating an hourglass silhouette by means of extremely tight corsetry and enormous structured Robe à la français hoop skirts.

Why Is It So Popular Right Now? 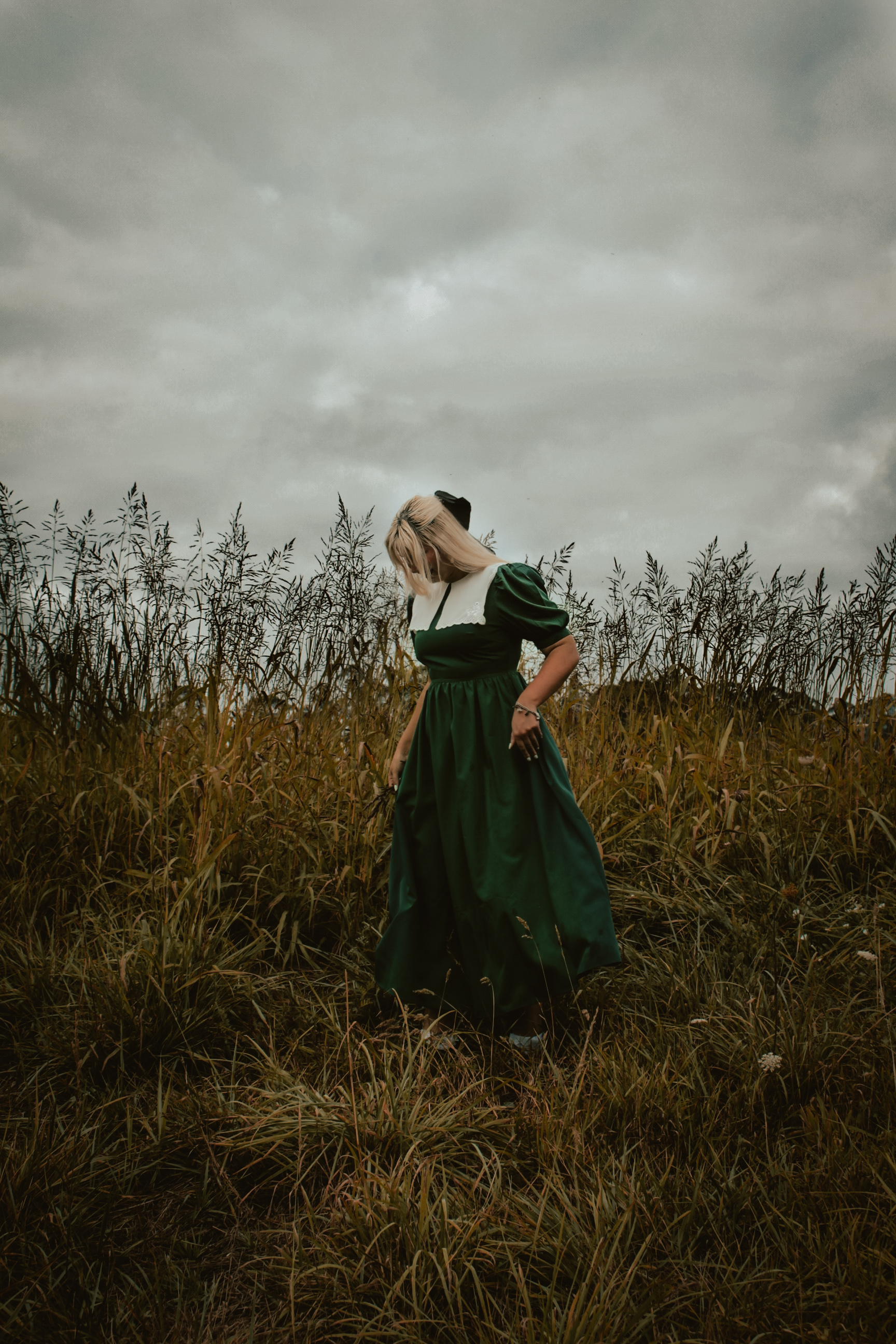 Melody Cardoso, aka @thebunnyboudoir stuns in a dark forest green retro dress, featuring a retro Peter Pan collar, transporting us back into another era. The cherry on top? An ultra feminine hair bow!

Advancement in technology increased these issues, more than ever we are surrounded by compulsion to be productive 24/7, typing away on our laptops or keeping notes on our mobile whilst on the tube, during dinner, or even late at night in bed. We are just never not working anymore. Being confined home had many people redefine their work life balance and concurrently see the faults in workaholism, leading to a reassessment and evaluation of modern values. This growing rejection of constantly present hustle culture and performative pressure, be it school, Uni, or the workplace, finally counters the shallow stylisation of what is a straight road to burnout, which peaked in the early 2010s.

In response to the financial crisis of 2007-2008, society became blatantly aware of the financial system’s vulnerability. Due to this instability the post-Recession era was marked by over stylised and highly aestheticized representations of toxic performative productivity and hustle culture. An attempt to ensure economic bettering was praised and developed into a desired lifestyle, defining one’s identity, and invading all aspects of life. It was not only about working long hours anymore, you also had to love and brag about it. Therefore, the key aspect of domestic productivity in Cottage Core turns this notion (which still upholds today) upside down. The aesthetic basically forms a counterreaction against the core elements of our capitalist-consumerist society values, encouraging a critical analysis. The belief that solace in the natural world is spiritually nourishing and a potential cure for all anxieties infiltrating our modern life is veritably a timeless notion. Moreover, it forms a fictional place, free of social constructs and boundaries regarding a wide range of fields, almost a kind of Utopia. Prominent examples are religious and spiritual tolerance, green and eco-conscious consumption, nullity of negatively connotated gender stereotypes and categorising. Subsequently, the scene is a safe space for lots of queer people to thrive, feel supported and comfortable,  juxtaposing the general notion that experiencing harsh rejection and exclusion is much more prevalent in rural areas and town fringes. 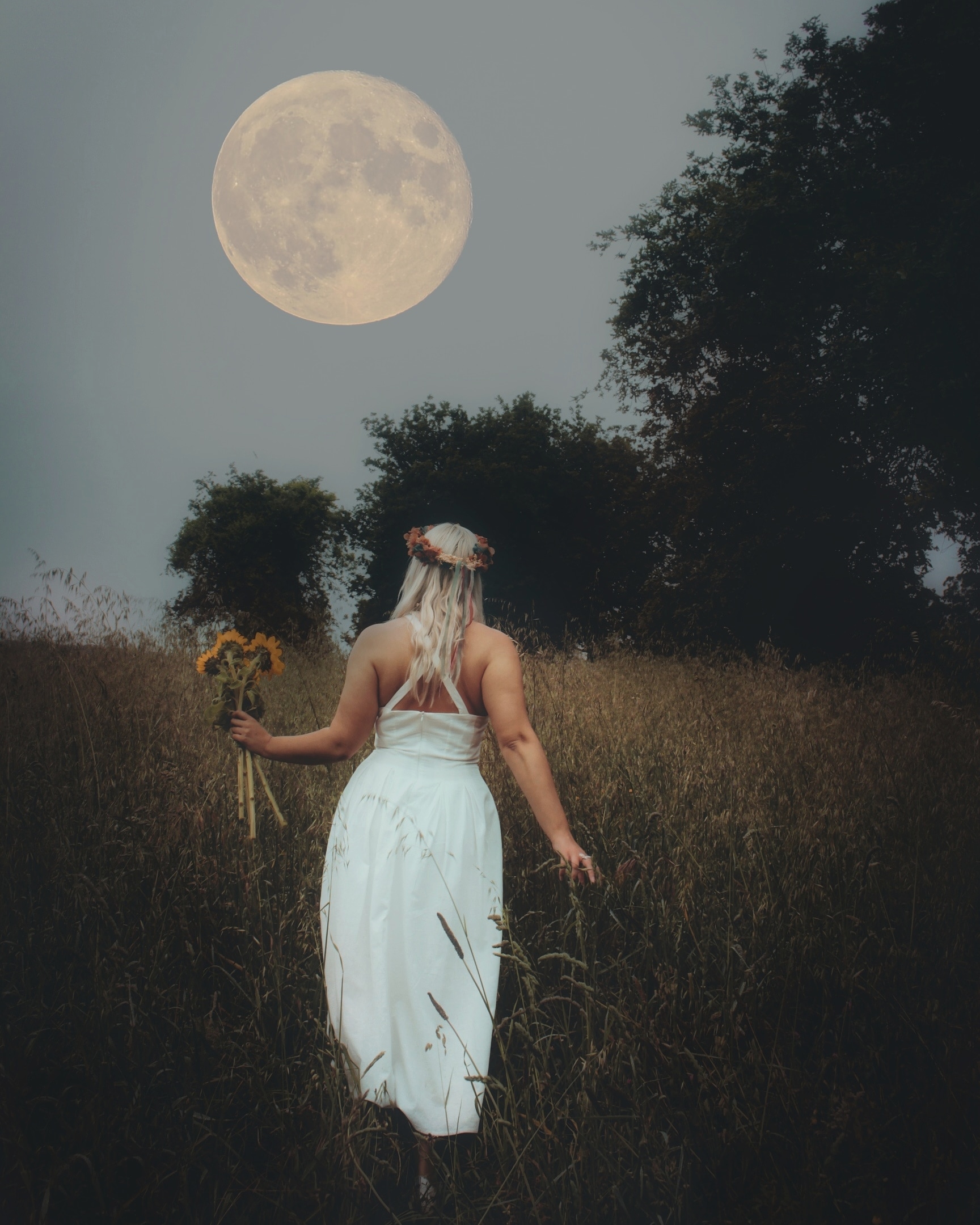 An otherwordly atmosphere can create escapist opportunities to daydream yourself into an otherwise inaccessible surrounding. Content creator @thebunnyboudoir is especially skilled in capturing enchanting shots like this.

The rise of this movement clearly fits into the current worldwide situation. With Gen Z making up a majority of its participants, the positive outlook and aim to preserve nature feeds into this generation's unmatched  evironmental consciousness and sustainability efforts entailed by it.