Why won't racism go away?

For me fashion week is over after doing two fantastic days of shows at our brand new venue at the Grand Connaught Rooms in the very heart of the fashion week homeland, but sadly the saga of the failure to use models of colour on the catwalks has not gone away despite the fact that this is 2013 and we live in one of the most multi cultural cities in the world. 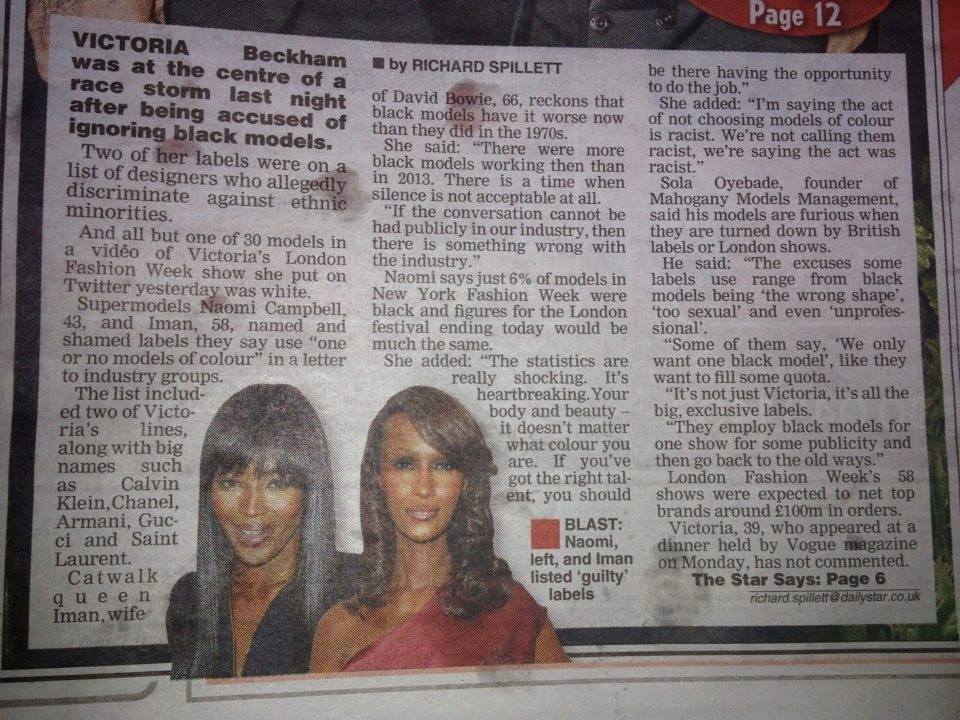 I happened to be on the tube train, yes I did take public transport – sadly, no car to drive as I am just visiting and I just did not feel like hiring a car and then having to pay congestion charges and have nowhere to park it – what a city. As I was saying before I rudely interrupted myself, I was on the train and someone left behind a copy of the Evening Standard and as I had a long cold ride on the tube I decided to flick through it and have a read and I came across an interesting article on page 20/21 entitled "Where are all the black models on our catwalks?". 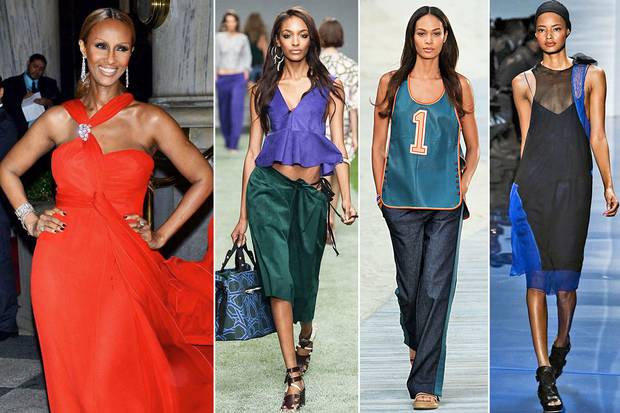 In brief Iman, Naomi Campbell and Bethann Hardison have teamed up to launch a campaign to combat fashions 'virtual white-out". It is a sad state of affairs when she states there were more models of colour used in the 70's when racism was rift then now in 2013. An in depth research was done across all four of the big fashion weeks (London, Paris, Milan and New York) and only 6% of the total models used were models of colour.

The figures above do not surprise me in anyway whatsoever and I could have saved them money by not paying to do the research as you can see that models of colour are not being used anywhere. Similar to when I did the Italia Vogue All Black Issue it was simply about having the necessary facts needed to back up their arguments. I love Iman as she shoots straight from the hip and says it is blatant racism.

The coalition goes on to list the designers and fashion houses they say are "guilty of this racist act" and I can't say you would be surprised at the names listed which include, Calvin Klein, Donna Karan, Chanel, Armani, Gucci, Saint Laurent, Victoria Beckham ( sorry I have to add an extra comment here but to me from time she allegedly looks like a racist – I apologise to any Victoria Beckham fans that I have offended), Roberto Cavalli and Marc by Marc Jacobs.

The above is a very impressive list, one that I would not want to be a part of. I will come back to all of this later but I want to briefly talk about London Fashion Week. At the moment there are three big main shows, British Fashion Council (on schedule), Fashion Scout (off schedule) and Fashions Finest (off schedule). The first two shows are seen as mainstream and feature mainstream designers and rarely have any black models, Fashion Scout has at least one or two more than British Fashion Council shows, but listen to this our Show Fashions Finest was described as a "black" show (this was said by a white person). Was I surprised by this, yes I was and I was surprised because as far I was concerned I did not see our show in terms of the colour of our designers but simply that we had a good designers. Then again I suppose I am being naïve as the moment you have more than one black designer and two black models at a show then duh it must be a black show. It's irrelevant that we had white designers, Polish and English models at the show and the ratio of black/white models and designers was evenly balanced in the eyes of mainstream our shows are black shows.

I applaud the three super divas (said in the nicest of ways) for their initiation of this campaign and I applaud Iman even more for her stance that she would not spend her money with any designer that refuses to use black models. I just wish that more of us would take that stand and stop putting money into the pockets of those that refuse to use us in their shows or campaigns but are very happy to take our money and grow rich.
I do hope that one day especially our women will wake up to this slap in the face and stop spending money with these designers, the only way to teach them a lesson is to hit them where it hurts them the most - in their wallet.

It is absolutely outstanding that Iman and co have the courage to actually name and shame the designers and as far as I am concerned it's about time too. The beauty of it all is they can't be sued because there is documentary evidence to prove their claim.
Fashions Finest has no regrets for being viewed as we are because we have become and I can say it categorically the biggest and only multicultural show during London Fashion Week.

Even though the black community is not vocal about their outrage at the lack of recognition for people of colour on the fashion catwalks of the world, either by the showing of models or designers at the big shows at least black people particularly Africans have started trying to do something about it. This can been seen by the wave of independent fashion weeks that are springing up around the world particularly the Africa Fashion Week's such as Africa Fashion Week London and Africa Fashion Week New York to name just two of the biggest amongst the 10 or more shows there are around the world. The message is we can do bad all by ourselves.

I don't think things will ever change amongst the designers and the owners of the official big four fashion weeks unless there is a massive public outcry or legislation is introduced and that is never going to happen, simply because unlike Jewish and Asian people black people just accept things, we moan quietly in our homes but don't have the guts and the courage to stand up and fight for what we complain about. I say it all the time and people laugh at me but part of the reason why I don't get any recognition within mainstream despite what I have achieved is because I have and I am prepared to rock the establishment boat, but sadly the likes of myself and Angel Sinclair cannot change the world by ourselves.

It reminds me when I hear black people complain that black people don't win such shows as X Factor, Britains Got Talent etc – very simply put it's because you won't vote either cos you are too damn cheap or just can't be bothered, but you can be bothered to complain (the use of YOU is not aimed at you personally that is reading this blog, it's just a general term I use), however if you do feel you fit the mould then I say no more.

If there is anything I can do to support this campaign you can trust me that I will be screaming from the rooftops and if any of you wish to join me, I have an enormously big roof.