It's been a while since I last did a blog but that was because I was waiting to move to my new home, which is now permanently based at Fashions Finest (FF) magazine. I am pleased that FF has invited me to host my blog, so please tell people where I have moved too.

My blog is meant to be interactive so please give your views or comments on the page and it is very easy to do, don't be afraid to, as all views good or bad are welcomed.

This is a very exciting year for Mr Mahogany and with the year just starting there are already some very exciting things happening.

Events for the People...

One of the key aims of Mahogany is try and do many affordable events and where possible even free events, either to participate or to attend. I can't promise that this will be the case all the time but where we can we will.

Mahogany Events has been taken on as the show producers for this exciting two day fashion week, which will be taking place in July 2011.
So if you are a graduate, new, emerging or established or international designer then EMAIL for how to showcase, the great news is for those that are selected if they are UK based there will be no fee to participate. We also have places for companies that wish to exhibit (sorry this is not free).
About AFWL...

AFWL will bring together all of the fashions industries greats, including culturally diverse, emerging, aspiring and established designers, publishers, fashion icons, fashionistas, celebrities, media, socialites and members of the public.

AFWL is a platform that will showcase top international fashion designers alongside new and emerging designers who use African fabrics in their designs, are inspired by the African culture, sell to the African market, have ties to Africa and who want to cross over into mainstream fashion, thereby creating an atmosphere for cultural exchange, a fusion of western
and African culture through fashion. 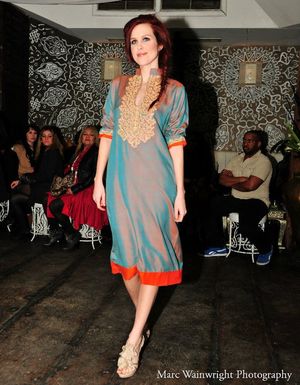 This has been a phenomenon and since its inaugural show on the 16th January we have already done two shows and on the 19th & 20th February we would be having our two days of London Fashion Week shows. Most of the designers that have showcased have never showcased before and since doing FFR these designers have attracted nationwide publicity and numerous contacts from within the fashion industry.

The evenings have not only been about fashion but have also included great entertainment and brilliant networking opportunities where already I have been informed that lots of business and deals have been done.
Fashions Finest have been kind enough to agree not to charge people if they are on the guest list and the average cost to participate in these fantastic shows has been under £100.

From the 18th to 23rd February, its here again and it would be 6 days of sleepless nights, running from show to show and I will be reporting for Fashions Finest, so check out the LFW update from Mr Mahogany and the various FF reporters.

I can only say Fool Fool, did he honestly believe that after claiming expenses for a house he never lived in or even knew where it was, that he could go to court and expect to be found not guilty. What an idiot, a previous MP had already got an 18 month sentence, a second one had pleaded guilty and the high and mighty Lord Taylor thought he would get off free with a lame duck excuse as to why he fiddled his expenses. The great thing about this is that I don't have to say allegedly.

It is not often that black or Nigerian movies are able to do movie premieres at the home of movie premieres, the Empire Leicester Square but on the 24th February a Nigerian movie called the Mirror Boy featuring Genevieve Nnaji, Osita Iheme (Paw Paw) and my good friend Fatima Jabbe will be hosting its world premiere. I feel privileged that I know a lot of people involved in this fantastic project (yes i am name dropping) but this film was written and directed by another friend of mine Obi Emelonye. 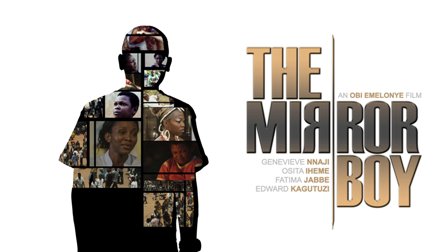 By the way they will all be coming for the premiere and Fashions Finest will be doing red carpet interviews and taking pictures of the guests and celebrities that attend. So if you are coming out to see the stars make sure you come and see us so that we can feature you on FF who are proud media sponsors of this world premiere.

WATCH PREVIEW OF THE MIRROR BOY

I know it has been a very long time since I last did a moan and groan and I have received numerous emails and texts form readers that when am I doing one again. Hey I can only do one when I have something to say and trust me this time I do.

A lot of the shows that I do or try to be involved in for me they must have an element of giving something back and as such we try and give models the chance to participate in big or professionally managed shows and sadly as much as I hate it a lot of the time the models are not paid (but they do get great experience, training, pictures and lots of publicity – models that have been in our shows can attest to this).

Any way that is an aside, recently following a show that I did I asked for models to volunteer and model for the show and a number of models put themselves forward – THEY WERE NOT FORCED OR A GUN PUT TO THEIR HEAD OR WERE THEY TORTURED to put themselves forward, so why did they agree to do the show and then not turn up and to make it worst they did not even have the courtesy to call, text, email, send a courier pigeon, write a letter, dhl, ups, call a friend, Facebook or BBM me to say they would not be showing – rude people.

Now for those of you that know me, know that I don't take nonsense and I am an action man. I have spoken to a number of casting directors, magazines, designers etc and we have all agreed that we will maintain a DO NOT USE LIST of models not to use for shows (including free shows & shoots). We can't keep fighting for black models 2 get more work and then they do exactly what mainstream says they will do - be unprofessional (this is only aimed at the unprofessional, no show, I am sick, a member of my family is sick or just died model) - Models need to get their act together or get out of modelling as you are spoiling it for others.

ENOUGH IS ENOUGH ITS NOT BY FORCE THAT YOU MUST BE A MODEL!

Yet another fashion- fabulous weekend has passed at the luxurious desert "Oasis" Dubai, proving once again that Dubai can get really Haute in the summer.

Dubai Fashion Fiesta 2010 was held from 22nd to 24th July, bringing out the best of the region's fashion creations to a catwalk, and I couldn't help but share some of those stunning incredibly feminine designs with you.

The never- ending catwalk drama of Amato Couture by Furne One, the brand that has dressed the finalist of Heidi Klum 's "Top Model of Germany" for the second time this summer and not only that; Amato Couture is considered to be the "Dubai's Hottest & Most Luxurious" label to date. The designer's "fairytale" creative style can never be compared to any other and that could be the main reason behind the "Excellency" of his work that brought him well deserved clientele of local and international "High Profile Society" as well as couple of "Royal Houses".

Amato Couture is far from being an easy affordable fashion, but if you do get a chance to get your hands on it, I would suggest not to let go, as the only "tag" that could go well with this brand is "Priceless". 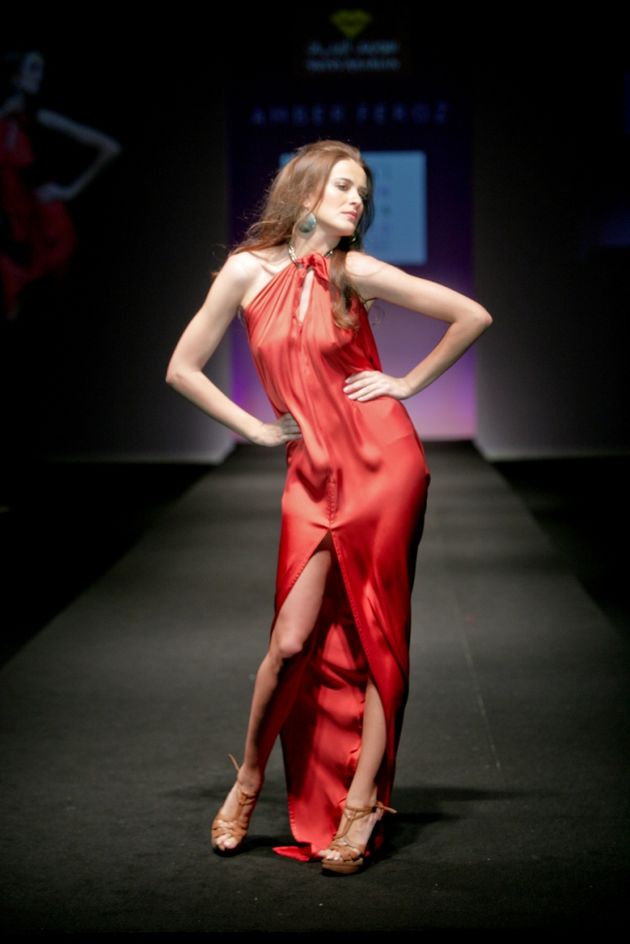 Not one of the local media favorites, but definitely one of the region's female society; Amber Feroz has marked the Opening of his new boutique in Dubai on DFF '10 catwalk, proving the critics that his "art" could be well wearable. Beginning his career with internship at Armani Prive, through the years we've been watching him creating amusing pieces with the simple cuts and seamless stitching, but this time the designer's vision has changed and finally those pieces could be worn by any woman irrespective of the age and size.

The best part of Amber's new Couture collection is that, the garments are simply gorgeous and do not only highlight the best features of one's body, but also effortlessly camouflage the flows of any figure, making the one who wears it feel like a goddess. And that is not all, each of the garments could be worn in several different ways that makes the size of our wardrobe smaller, but increases the number of special occasion outfits. 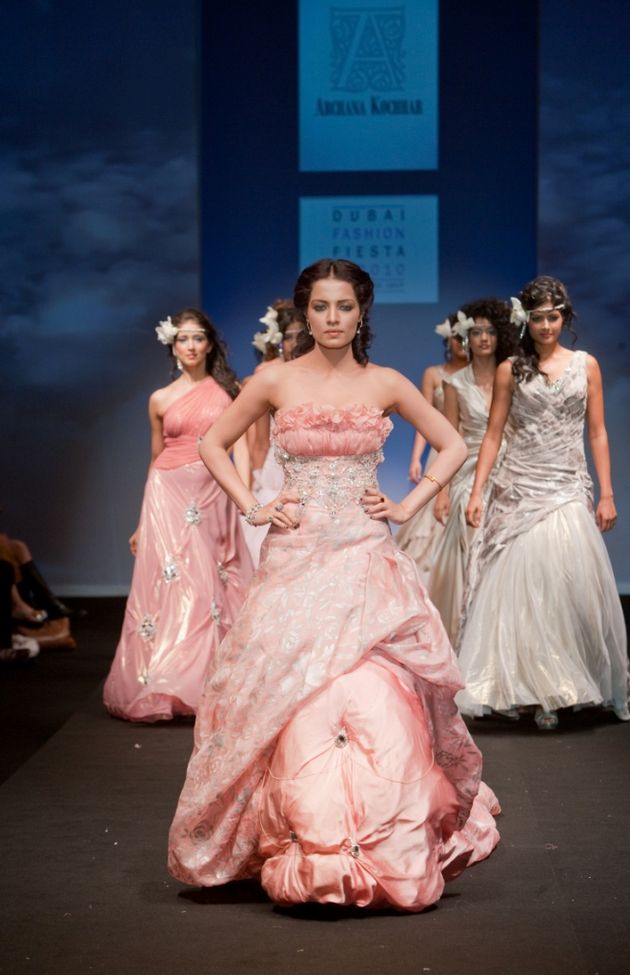 Fast fame- raising Indian designer Archana Kochhar, is the one to watch in this region. Having several Bollywood Celebrities' that comes to mind along with the Brand's name, such as Celina Jaitley (Miss India 2001 & Infamous Bollywood Actress).

Archana's work is concentrated on purity and femininity, wearing those haute couture garments does make you feel like a princess; taking you back in time of the far Centuries where the men remained Gentlemen and women had never had to open the door on their own.

I believe her dresses have been specially designed to bring out the emotional side of "Cinderella" in each one of us, and give the feeling of the magic childhood stories with only difference that now you can dress and really feel like one in one those gowns. 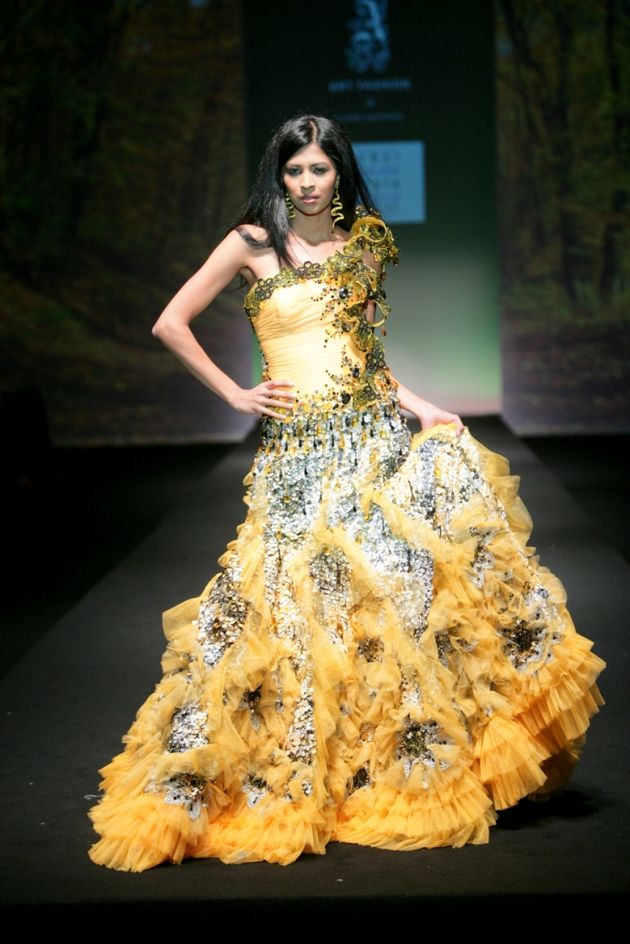 Aldwin Ornopia Guardiana is the designer behind the brand whose name does speak for itself. Aldwin is one of the up-and-coming or I would rather say "Rising" stars of the "Desert". His design inspiration comes from the life events and environment the combination of which transforms his imagination on the catwalk. However in my opinion Aldwin's creations are not only catwalk but more of a "Walk of Fame" material that takes my imagination straight to the Hollywood Red Carpet.

Incredible Haute Couture designs with a touch of Avant-garde and "hand-made" work of so not "echo friendly" details, and combination of Crystals, feather, lace and silk makes the garments a breath taking and phenomenal to look at, never mind wearing one. So the next time you're wondering "Who" to wear for a Red Carpet Gala or how to make an "Entrance", wonder no more as the only thing you have to do is to put on one of the gowns and the Art Fashion will do the rest.

The Best Dressed in Town Now

From Eva Mendes in Oscar de la Renta to Karlie Kloss in DKNY
Published in News
Tagged under
Read more...
Page 69 of 69