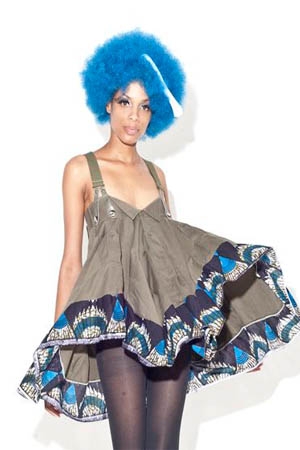 Up-cycled clothing designer Mia Nisbet, an Honours graduate of Glasgow School of Art, first worked as assistant designer for Michiko Koshino in London then as casual wear designer at USC. In 2007 she launched her own label, MIA By Mia Nisbet, which fuses recycled clothing with traditional Malawian textiles. Awards quickly followed including Ethical Fashion Forum's 'Make Your Mark In Fashion' Award in 2008 and the 'Innovation Award' in 2009 in association with the British Fashion Council.

Inspiration for her collections comes from Mia's time spent in Malawi. There the street market traders sell large volumes of donated second-hand clothing imported from the US and other developed countries. Malawians mix these imported clothes with their traditional dress. Mia is inspired by the visual impact of the merging of two different cultures. MIA presents up-cycled, eye-catching ranges based on this fusion between tradition and modernity all sourced from these street markets.