Written by
Rate this item
(0 votes)
Since the recent release of the powerful, uncanny movie starring Angelina Jolie, Maleficent, Disney's most iconic villainess has once again become a topic of conversation on an international scale, with interest circulating beyond the film industry.

Receiving outstanding reviews and provoking global controversy at times, Maleficent graces the silver screen to present us with the tale of the horned queen of evil. However, admiration for the film does not stop there, as Ferragni proves with her unusual yet charming slippers inspired by this summer's modern fairytale.

Ferragni, whose SS14 collection hosts an array of similarly unique designs, marries complimentary dark shades similar to those used to fabricate the fictional character which featured in Disney's animated film of Sleeping Beauty in 1959. Available in two shades, charcoal grey and black, Ferragni's glittered shoes promote the iconic intimidating, evil glare of Maleficent herself, fashioned using various shades of purple to create a striking feature which reinstates Maleficent's power through something as simple as a glance.

These limited edition flats, created in collaboration with Walt Disney to celebrate the release of the film, are crafted using a combination of suede and leather, for quality, durable slippers that will function as a quirky addition to your outfit this season.

View the embedded image gallery online at:
https://www.fashionsfinest.com/fashion/item/3513-chiara-ferragni%E2%80%99s-maleficent-shoes#sigProId3d23e167ac
More in this category: « Mark Cross’ Grace Box collection How to identify a 1940s Dress » 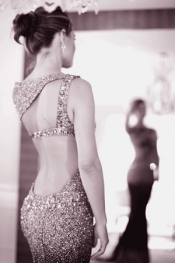