Written by
Rate this item
(0 votes)
The hotly anticipated third leg of the Hunger Games hits UK cinemas on the 21st November as we get ready to join Katniss Everdeen on her latest quest for justice.

But it seems Jennifer Lawrence's tough and heroic character has not only impacted film goers but fashion too, as designers looked to powerful women as inspiration on the autumn/winter 2014 catwalks.

Dolce and Gabbana, known for their ultra feminine designs, literally gave their models a shield of armour at Milan Fashion Week taking inspiration from medieval knights and fairytale heroines. With chain mail covering heads and silver encrusted breastplates, these were girls you didn't want to mess with! Versace too seemed to be feeling particularly tough for winter, as Donatella Versace sent out punk inspired biker boots and black leather mini dresses, complete with tassels for added resilience. There was a certain military feel throughout the whole collection, with Donatella revealing her late brother, 'Gianni used to collect vintage military uniforms and medals,' cementing the fact that this was a show for only the hardest women.

Olivier Rousteing at Balmain also opted for khaki military jackets, boxy silhouettes and lots of stud detailing to make his models look extra ferocious. There was no doubt about who the Balmain girl was for next season and she's most defiantly a girl you don't want to mess with. There was a different kind of feel at New York Fashion Week, more of a dominatrix who commanded the attention of everyone in the room. Donna Karan gave us a wonderful yet sultry collection, with cut-a-way silk dresses in red and black as well as masculine pieces that fitted perfectly with the powerful mood of the show.

Could it be the Katniss effect? Who knows! One thing's for certain, this winter its okay to go out dressed in a heavy black leather jacket adorned with studs or stacks of silver necklaces around your neck. Its time to toughen up and take winter by storm!
Published in Fashion

View the embedded image gallery online at:
https://www.fashionsfinest.com/fashion/item/3769-only-tough-girls-allowed#sigProId1f430ba29b
More in this category: « Conquering the Winter Knit The Secret Garden Collection » 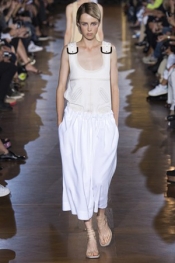