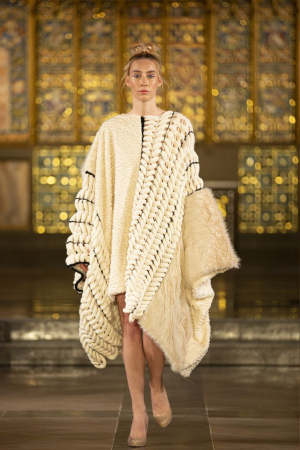 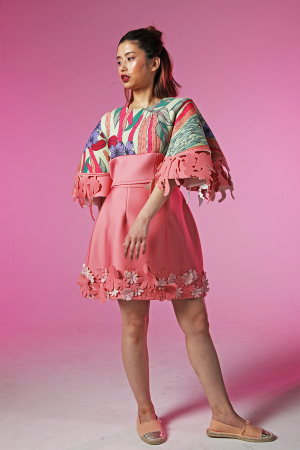 Desree & Sabina London brand is inspired by the hues of nature, merging the bold and the delicate.

The brand came together through two friends who studied fashion textiles at the university of the creative arts in London. Although their styles are very different, they complement each other through their love of fashion and creating pieces that inspire. All the patterns, prints and final designs are done in-house giving them a personal touch. 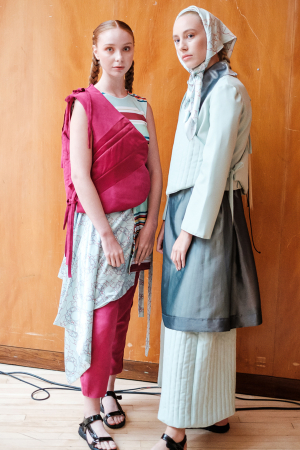 Hailed as one of the most exciting bi-annual events of the year. 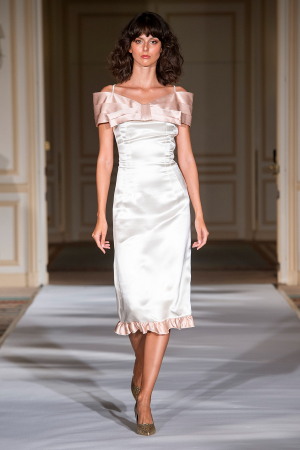 Alianna Liu's SS2020 collection is inspired by her cats. 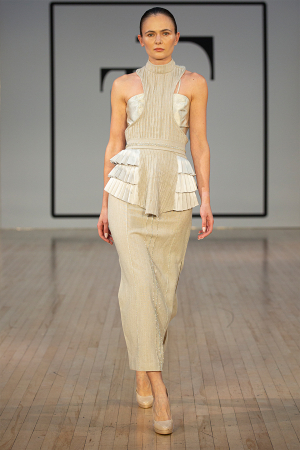 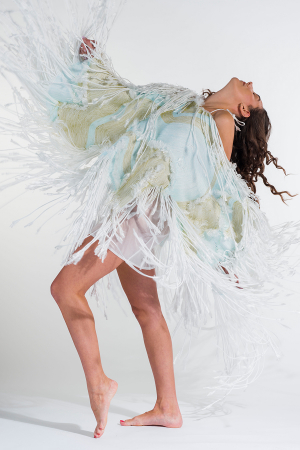 Emma Banister has recently graduated from Norwich University of the Arts where she completed a Fashion Design and Textiles degree. Her designs and graduate collection were characterised by the use of unorthodox materials such as rope and expired parachutes. The utilisation of these sustainable and unique fabrics caused her designs to have a great texture and form. The inspiration for her designs came from the sea and the flow and structure of her designs reflect that. This young designer has showcased great skill in creating stunning pieces from neglected materials and aims to keep sustainability at the forefront of her designs. 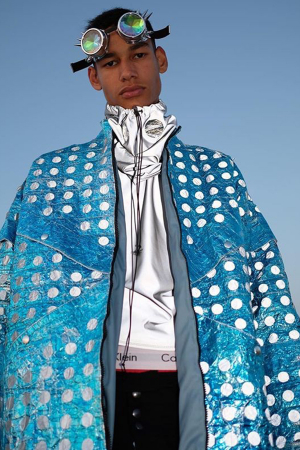 Rose Brown grew up in Welsh countryside and graduated from the Manchester School of Art in 2018. Her goal is to create things that are truly never seen before, using unconventional textiles and concepts derived from the weird and wonderful place that is the inside of her head. She strives to find out what it means to be truly different and to be it.

Her collection is called Aprés Lunar, which means ‘After the Moon’. Taking inspiration from 1980s skiers and WW2 flight suits, it brings the excitement of adventure from the Space Race, back to the 21st century.

The main inspiration is a light art installation by Christopher Schardt, which was displayed at the festival Burning Man. The piece is called ‘Firmament’ consisting of a series of LEDs, draped in triangular form across the sky.

This inspired her angular pattern cut and her use of reflective materials that represent electric light.

Her realisation moment was when she was dancing on a stable in the French Alps. It helped her to understand how skiwear can morph into party wear and vice versa. She had to live it, to make it.

Each look has reflective properties that come to life under the flash of a camera, transforming the collection. Her metallic spacemen dance the night away, lighting up the slopes as the go.

The six look collection is a glowing series of blues, coppers, silvers and metallics. It is outerwear heavy, mixed with shining leggings, scuba tops and salopettes. She made her own fabric by bonding aluminium and copper onto cottons to create garments treading the line between wearable and unwearable.

After graduating, she was selected and flown to China for the International Youth design competition (IYCD) in the Beijing Institute of Fashion Technology. She has also attended charity fashion shows with her collection, in London, Glasgow, Manchester and Wolverhampton. Glasgow raised £34,139 for Simon Community Scotland.

She now has a studio space so that she can continue her work, with a new collection to be released AW19. 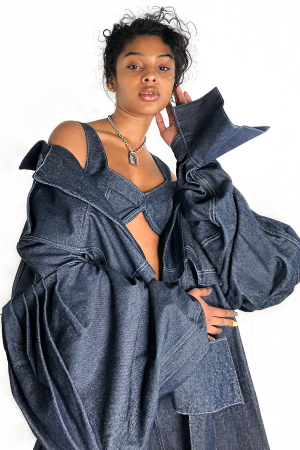 Cabrini Roy represents a new age of luxury ready to wear fashion, with her innovative way of creating bold silhouettes whilst staying true to her minimal style. Emerging from London College of Fashion, Cabrini explores ways to visually represent her story whether that be drawing inspiration from her childhood to create contemporary streetwear or taking influence from her filipino culture. The garments create a distinct style yet stays comfortable enough to be worn every day. Each design includes a touch of Cabrini Roy, a woman who hopes to empower through her pieces, with an emphasis on setting your own trends with no boundaries on the numerous amounts of ways to style each essential piece. 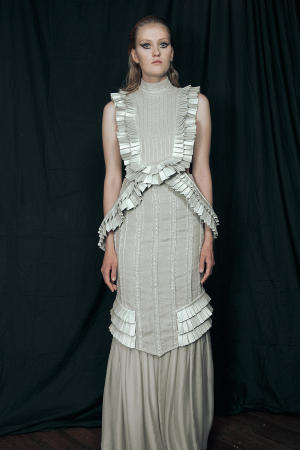 "Evelina Anglickaite – a fashion designer who is passionate to keep the traditions of haute couture whilst designing in harmony with nature, being aware of the environmental issues of the modern-day. Based in Amsterdam and Brussels, the designer is constantly influenced by various cultures, yet is mostly inspired by Japanese philosophy, art, and history.

The designer introduces a contemporary concept of evening wear, made from sustainable fabrics, and more specifically – linen and natural silk.

The Spring/Summer 2020 Capsule Collection highlights the relationship between the Western beauty of radiance, majesty, grandness, and the Eastern beauty that is austerity, simplicity, and hidden beauty."

As a concept and bespoke designer not afraid to think and design ‘outside the box’, versatility within conceptual, statement and original designs is where Celine Zara’s creative flare lies. She holds a strong belief that any design should tell a story, create atmosphere, provoke emotion and most importantly, have meaning. Celine’s collections are often inspired by reflections on society and aim to produce a positive message to make people think and reflect. Using physical objects for design details and silhouette Celine produces creative, unique, structured designs with a strong emphasis on remaining true to the concept research. Passionate about using unconventional materials, her recent Graduate collection featured metal structures, inspired by the internal structures of Cavendish Pianos, which adorned the body, working beautifully with the garments in order to create the overall shape and look of  the collection ‘Sonata in F’. She thrives on using her unique creative vision to find beauty and inspiration in the most unconventional of places, pushing the boundaries of fashion in order to create something truly inspiring.

Published in Designers
Tagged under
Read more...
Page 1 of 10